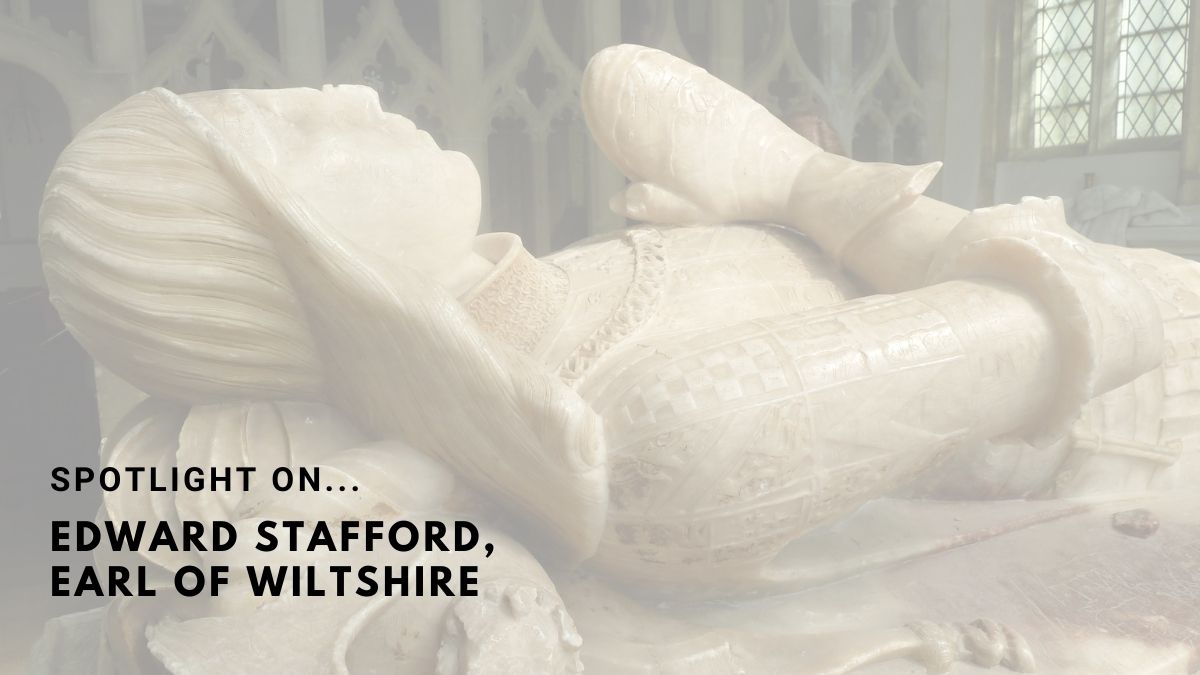 Who was Edward Stafford?

One of the lesser known Tudor noblemen, Edward Stafford was well-connected by birth but made little mark on the political scene and died before he was thirty. His father, John Stafford was the third son of Humphrey Stafford, duke of Buckingham (d. 1460 at the Battle of Northampton) and Ann Neville, daughter of the earl of Westmorland. His mother, Constance Greene, was the only daughter and heiress of Henry Green of Drayton, a Warwickshire based gentleman. From the Greenes, Edward would inherit extensive lands in Northamptonshire.

Edward was born on 7 April 1470; his father died in May 1473 and his mother in March 1474/5 leaving him orphaned at just four years of age. Responisbility for his governance and tuition was given to his grandmother Anne, dowager duchess of Buckingham. He was present at the coronations of both Richard III in 1483, where he carried the Queen’s crown, and the coronation of Queen Elizabeth of York in 1487. He helped defeat the rebel army at the Battle of Blackheath on 17 June 1497 and hosted Henry VII at Drayton in 1498, but otherwise his career seems to have been undistinguished. He secured a suitable marriage to Margaret Grey, daughter of Viscount Lisle, but they had no surviving children. Edward died in March 1498/9, at the age of 29.

END_OF_DOCUMENT_TOKEN_TO_BE_REPLACED

With Netflix having a new docudrama about Anne Boleyn, it seemed a good time to revisit photos from our visit to her childhood home, Hever Castle, this summer. The mannequin is Anne on her first recorded appearance at the English royal court when she took part in a masque as "Perseverance".
Berkeley Castle has been in the hands of the Berkeley family since the 12th century (well, except for a very small Tudor interlude where it was held by the crown).
18th century pump in the Fellow's Garden at Merton College, Oxford.
Font at All Saints church in Wroxton, north Oxfordshire. It dates to the 14th century but was reputedly recarved in 1845 - still need to get to the archives to double check the sources for that!
Some of the roof timbers in the Christ Church archives date to c. 1403 meaning that the building is older than the college itself (founded in 1524 by Cardinal Wolsey and refounded by Henry VIII as Aedes Christi or the House/Church of Christ 1546)
Since the 17th century, the chancel of All Saints Church in Banbury, nr Banbury, has essentially been a mausoleum to the Pope and North families with a number of notable memorials erected in the chancel.
A few Commonwealth War Grave Commission memorials from around Oxon/Berks/Bucks. In addition to the large war cemeteries around the world, these memorials can be found in churchyards around the UK - often just one or two in rural locations.
Charming little thatched church in Wroxton nr Banbury - Catholic Church of St Thomas of Canterbury